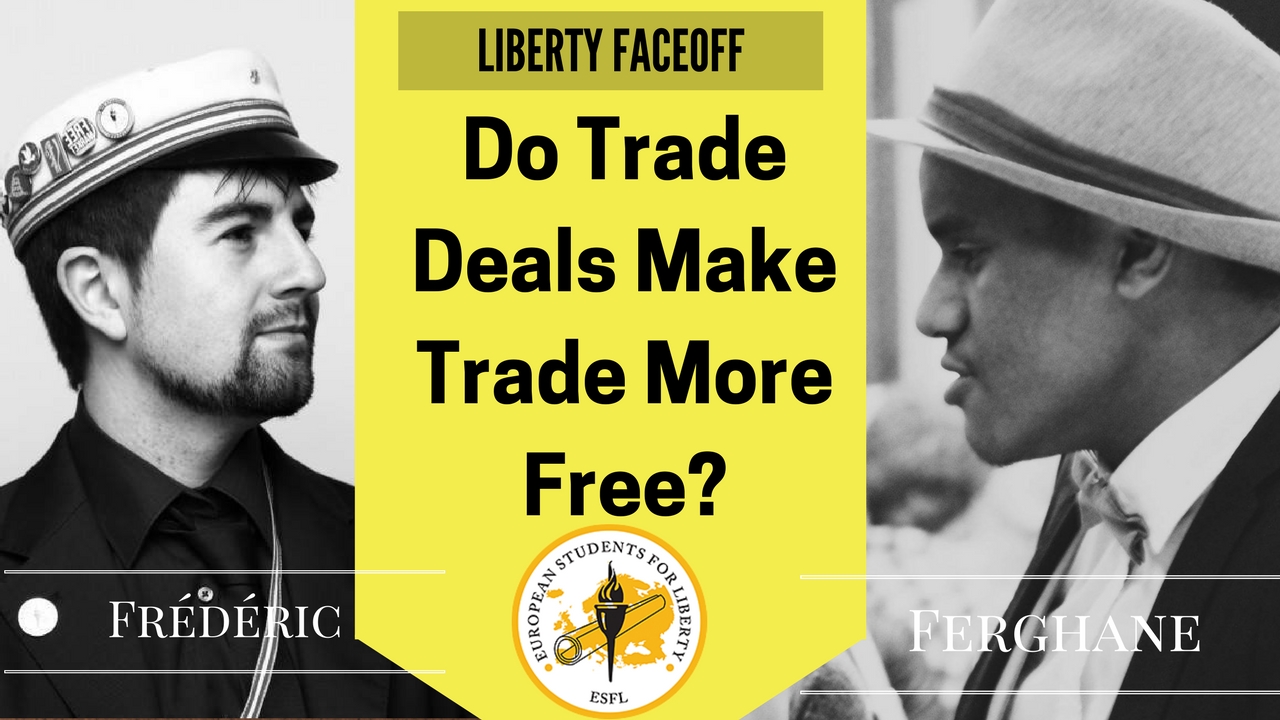 Do trade deals make trade more free? That is the question Frédéric Jollien and Ferghane Azihari will debate in this Liberty Face Off. Do you have an issue in mind that you’d like to see discussed among libertarians? Please contact Bill Wirtz or Marie Hemelrijk, and your suggestion might be the topic of the next Liberty Face Off.

Classical liberals would benefit by analyzing the reality of the current system rather than trying to apply the libertarian purity of political constructions. Without a doubt, so-called “free-trade agreements” pose a number of problems that liberals must and should denounce. The term “free-trade” deserves nuances and our attention. However, to keep fundamentally opposing these treaties is a mistake, because they bring far more benefits to the current arena of political ideas than they do damage.

To analyze them, one must look to what nation-states do in the absence of such treaties. The analysis of the school of public choice is quite clear: politicians are driven by the strength of the democratic system to extend the number of protectionist laws. Even when classical liberals succeed in convincing with our ideals of free trade, they succeed only in the short term if institutions have not implemented a binding mechanism.

The free trade agreements enacted after the Second World War eradicated an impressive amount of tariffs and taxes such as customs duties. They tied the hands of politicians to a structure that could hardly be changed as international treaties were the “supreme law of the land”. By trading more freely between them, European countries have come closer and have greatly improved their conditions. The longest peace in the history of Europe is certainly connected with this “doux commerce” created by these treaties. Also these agreements demonstrate that long-term work of economists and proponents of free trade has made progress. After centuries of war and mercantilist pursuit, at last there are shifts in favor of liberty.

Yes, politicians are still driven by the idea of controlling production for reasons of safety, health, and the environment. Yes, the amount of common standards put in place are massive, but it mustn’t be forgotten that nation-states have done this for centuries. It needs to be said that these common rules and these Mutual Recognitions Agreements (MRA) have drastically reduced transaction costs for firms because they didn’t need to pass a multiple conformity test anymore.

For example, after bilateral agreements between Switzerland and the European Union (signed in 1999 and 2004), Swiss exports almost tripled within a decade. Foreign investment quintupled and growth returned after a decade of stagnation. The agreements allowed a greater number of foreign products into the country, bringing more competition to local businesses. Similarly, for most European countries, the creation of free-trade agreements has allowed an enormous boost that would have been unimaginable before the fall of communism.

We do not live in a world where liberal principles have triumphed. Protectionist and collectivist forces, principally, are the parties who do not want these agreements. To take their side because these treaties are not as pure as we would like is not an ideal scenario.

We must make compromises in order to move towards greater prosperity and freedom. Being uncompromising about principles is a good thing for reflection, but we also need individuals who can understand the political system and can work by consensus for our ideas.

The politicians and specialists who created these treaties are not pure liberals. But they understood some fundamentals of economics that significantly improve our well-being. One of these principles is that the multiplication of exchanges and the increase of competition represents an overall positive impact for the population. Faced with the violence of political debates and the power of protectionists, efforts by those who bring trade agreements to the table should be welcomed, not demonized.

Indeed, there are problems with these agreements and I willingly recognize them. But condemning these agreements on principle is frivolous once we take into consideration the enormous economic contributions that has made possible in all the countries concerned.

Let’s be straightforward: trade agreements are not about free trade. Free trade does not require several years of international negotiations or multiple bureaucratic institutions such as the European Union or the World Trade Organization.

It does not either require thousands of pages of new regulations as it seems to be the case for the Transpacific Partnership (TTP) or the Comprehensive Economic and Trade Agreement (CETA). If a government truly wants to promote free trade, the only thing it has to do is to repeal unilaterally (progressively or not) every kind of tariff or regulation impeding international competition. The question is, therefore, to know if these agreements, despite them managing trade, are a good trade-off or not for advancing liberty in the international order.

While free trade means deregulation, let’s notice that the main ambition of these agreements are to push towards an international regulatory harmonization process. The harmonization of what is called non-tariff barriers is indeed at the center of current negotiations. Non-tariff measures are composed of various kinds of regulations: technical standards, sanitary rules, phytosanitary regulations and other bureaucratic compliances which businesses must satisfy in order to be allowed to put their products on the market.

Although these regulations are always implemented in the name of consumer protection, they tend to be mainly used for protectionist purposes. That is why the WTO is trying to implement an international framework to control the use of these measures, for example through the Agreement on Technical Barriers to Trade (TBT Agreement) or the Agreement on the Application of Sanitary and Phytosanitary Measures (SPS Agreement). But these agreements miss the whole point as they harmonize and centralize the production of non-tariff measures instead of helping us to get rid of them. This favors the reproduction of protectionist dynamics at the international level.

One can argue harmonization can reduce compliance costs of established companies. But there are less costly methods to reduce bureaucratic burdens on international trade. Unilateral recognition of foreign regulatory regimes is a better alternative to the extent that it lowers entry-barriers at the domestic level (especially for new entrants) while harmonization fails to unleash the full benefits of competition. Because harmonization weakens regulatory competition, it lowers emulation between governments and reduces our ability to control regulatory activities of international governments’ bodies.

This is especially true since non-tariff measures harmonization have become a means to implement a large international regulatory bloc to increase the power of some States to dictate their norms worldwide. It is not a coincidence that countries like China remain excluded from trade negotiations led by Europe or the United-States. Western countries are therefore irresponsible to engage a trade and geopolitical confrontation with one of the world’s future big players.

Lastly, we have to regret that trade agreements tend to be used in order to strengthen intellectual property rights across the World. One of the main objectives of governments is to reinforce patents and copyrights. This is a problem to the extent intellectual property is becoming an existential threat to free enterprise and freedom of communication, a threat which tends to expand itself to more and more industries.

Trade agreements may not be black or white. There might also be interesting measures allowing to open markets. And yet, trade liberalization measures are not exclusive to trade agreements: they bring other bureaucratic and corporatist inconveniences, consubstantial to the centralization of regulatory activities, which would be more difficult to fight. In politics, as in economics, there is what is seen and what is not seen. Let us be not fooled by « free-trade » rhetoric when our governments are actually preparing a trade and standards war at the end of which consumers will lose.

These pieces solely express the opinions of the authors and not necessarily the organization as a whole. European Students For Liberty is committed to facilitating a broad dialogue for liberty, representing a variety of opinions. If you’re a student interested in presenting your perspective on this blog, please contact mhemelrijk@old.studentsforliberty.org for more information.
Tags: Free trade Trade deals
Previous post 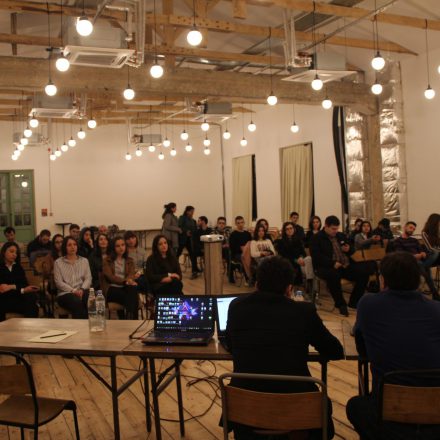 14.3.2017 Katie Shoshiashvili
On the 2nd of March, Georgian Students For Liberty organized a panel-discussion titled “kNOw Gazprom” as a part of the Defend Your Wallet...

18.1.2019 Heike Lehner
“It seems to me that this failure of the economists to guide policy more successfully is closely connected with their propensity to imitate as...