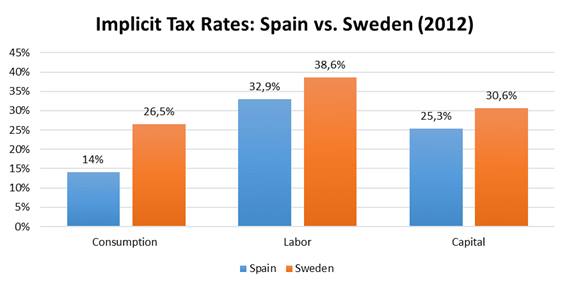 The Nordic countries are usually mentioned in the Spanish political debate as examples of well-functioning and efficient Welfare States where the government provides citizens with a large range of social benefits. Politicians, especially on the left side of the political spectrum, look at Sweden, Denmark or Finland as successful social democratic experiments in which social entitlements are guaranteed by the benevolent and caring hand of the State. Their existence is conclusive evidence that those who question the sustainability of an unlimited expansion of the Welfare State are wrong.

However, there exists a generalized misperception about the functioning of the Scandinavian economies. They are usually regarded as highly interventionist countries with hyper-regulated economies and very progressive taxation systems in which the upper classes sustain the Welfare State by paying their so-called fair share. This widely-extended view is fundamentally wrong for two main reasons. Firstly, far from being socialistic, the economic recipes that have led Denmark or Sweden to have sustainable Welfare States are those usually identified with the free market: deregulated economies and flexible labor markets. Secondly, the burdensome taxation system in the Scandinavian countries is rather regressive; hence, the fiscal burden is essentially borne by low and middle classes

The Nordics (the terms “Nordic” and “Scandinavian” will be employed interchangeably to refer to Sweden, Finland and Denmark; Norway and Iceland are excluded from my analysis) are ranked highly in the Index of Economic Freedom elaborated every year by the Heritage Foundation. If one looks at the business freedom indicator, which shows the efficiency of governmental regulations of the private sector, Denmark, Finland and Sweden appear in the top 15, whereas Spain is placed in the 44th position between Thailand and Uruguay. It seems obvious that there is a strong correlation between economic freedom and prosperity: those countries with greater economic, political and social development occupy the top positions in the rank. In fact, economic freedom (as well as a legal framework that enforces contracts and protects property rights) is the starting point that triggers the virtuous circle of economic growth: economic freedom leads to more investments in human and physical capital, which in turn results in higher productivity and, ultimately, in higher wages and increases in GDP per capita. Since the GDP per capita based on PPP of the Nordic countries is, on average, 30% higher than that of Spain, due essentially to their higher degree of economic freedom, the amount of taxes collected to pay for their social spending is, in absolute terms, considerably higher; and would still be higher even if Spain and the Nordics shared the same tax rates, which is not the case.

In terms of flexibility of the labor market, Denmark stands out above both Spain and its Nordic neighbors. To begin with, firing costs in Denmark are very low. For instance, a white collar worker that were unfairly dismissed today would receive a compensation of maximum four months of salary after working for ten years in the company. In addition, there is no minimum wage established by law and social contributions paid by employers on behalf of employees do not exceed 2% of the gross salary. In contrast, the severance pay that the same employee would receive in Spain would amount to between 13 or 21 months of salary (depending on whether current or previous legislation is applied). Using the same example, if the dismissal is considered to be fair, the Denmark employee would receive no compensation, whereas the Spanish employee would be paid around 8 months of salary. Furthermore, the legal minimum wage in spain is 756€ a month (although the cost for the company is substantially higher) and social contributions borne by the company account for one-fourth of the gross salary.

As for the taxation system, Scandinavian citizens are compelled to endure heavy tax burdens. For instance, the tax burden in Sweden, that is, the tax revenue as a percentage of GDP, is 42,8%, 1020 bps higher than the tax burden in Spain. However, and contrary to what is widely believed, this large difference is due to the regressiveness of the Swedish taxation system when compared to the Spanish one. In other words, it is not so much high-income earners who pay the Welfare State bill but the lower and middle classes via indirect taxes, which are obviously more regressive than taxes on labor or on capital gains.  As shown by the graph below, the most striking difference between Spain and Sweden in this regard lies in the higher tax rate on consumption applied in the Nordic country. 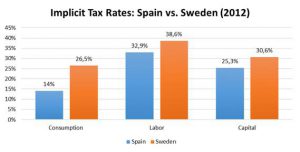 As shown in the analysis above, free-market economic policies and regressive taxation systems are the pillars on which the Nordic economies rest. The fiction, deeply embedded in the social democratic consensus à la Spanish, that an expanding Welfare State is compatible with an overregulated economy, an inflexible labor market and a progressive taxation system (all of them typical characteristics of the dysfunctional Spanish economy) is untenable. The advocates of the Welfare State on both sides of the political spectrum should realize that the only way to make it viable and sustainable in the long term is to undertake reforms that liberalize the economy and to further increase the already heavy tax burden that low and middle classes have to bear.

Luis Pablo de la Horra is a finance student at Vlerick Business School. Originally from Valladolid (Spain), he has lived all around the world, from California and Liverpool to Brussels. In California, Luis Pablo had the opportunity to do some coursework at Stanford University. After receiving his Bachelor in English Language at the University of Valladolid in 2015, he is now doing a master’s degree in Brussels. He will be blogging for ESFL on politics and economics. You can follow him on twitter at @luispablohorra 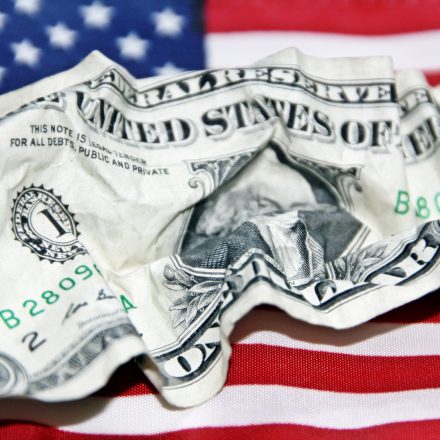 22.10.2016 Luis Pablo de la Horra
The post-recession period in the US has shown that economic growth is not what it used to be. The annualized, real GDP growth over the period... 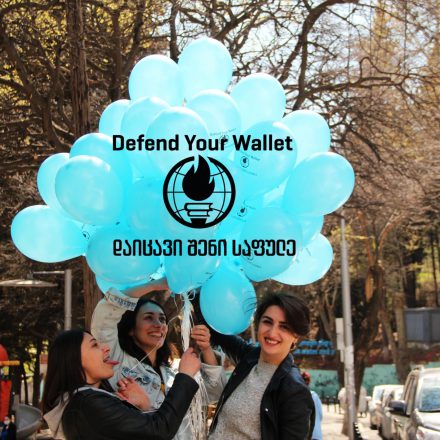 18.4.2017 Liza Katsiashvili
This report was written by Gaga Tutarashvili, Lisa Katsiashvili and Mariam Gogolishvili.  In 2011, Georgia passed the “Georgian law of economic...